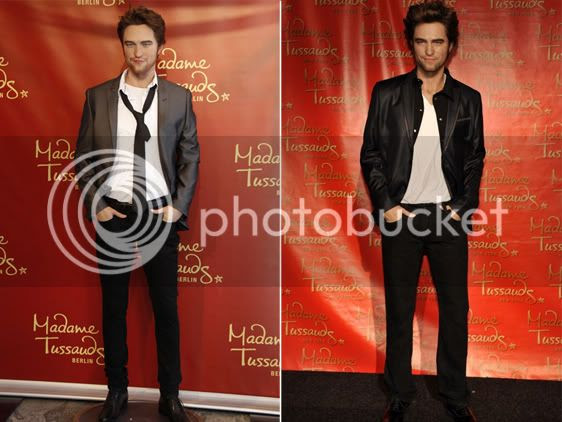 From the source: Fablife
Last year, Robert Pattinson‘s brooding mug was commemorated with two wax sculptures at Madame Tussaud’s in London and New York. The photo above on the right shows Wax Pattinson 2010 in all his sheepish, scruffy glory at last year’s unveiling. But this week, RPattz got yet another wax figure made in his likeness for the Berlin outpost of Madame Tussaud’s (above, left) and we’re not really thrilled about it. Sure, it has an updated, shorter hairstyle, but the face is somewhere in between Matthew Perry during his drug days and Gerard Butler on Slim-Fast. And even though Rob pulls off sexy-disheveled better than anyone, did they really need to make his outfit look like drunk guy at 3am after a wedding, with the crooked tie and messy collar? We weren’t loving the 2010 version, but we’ll definitely take it over this new, not-improved version.