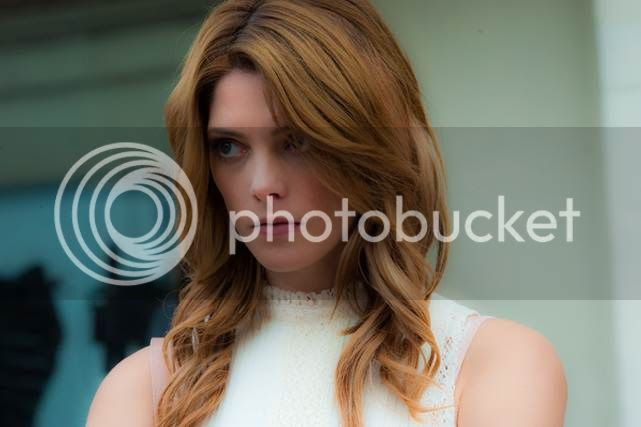 ShockYa: Joe Dante is the type of filmmaker – maybe because of his background with Roger Corman, but it also seems like it’s just part of his DNA – who I feel like I can always see the bigger-budget version of his movies, whether it’s “Gremlins” or “Matinee” or whatever, that spent more money but had a lot less personality and idiosyncratic appeal. How much of a factor was his involvement in attracting you to this film?

Ashley Greene: It definitely brought a lot of confidence to the film, I think, because the horror genre in general is a touchy and scary thing, no pun intended, because it can be very scary — or if it’s supposed to be funny as well it can be funny — or it can just be completely blown out of proportion and a total joke. Having seen Joe’s work, you know he can hit that mark, that he’s well-versed in (bringing a balance to elements), and is really knowledgeable when it comes to film. He knows what he’s doing. And so for me that was one of the huge factors in signing onto this film — along with Anton, because I think you need a talented actor to work off of, who gets things. And I think, like you said, Joe has this simplicity about him that I feel like we’ve lost — he doesn’t need a huge budget and explosions. He knows how to make things funny and how to make things work, and he lets you go back to the building blocks of the character, and allows the actors to really get involved in their characters even though you have this outrageous scenario. It’s been really fun to work with him.

ShockYa: A good portion of the film really charts a sincere love story between Max and Evelyn, I take it – tell me about the level of her obsession.

AG: Evelyn starts out as human, and is very… {pauses} over-bearing, over-protective and kind of a pain in the ass, honestly. She and Max are in this relationship, and she makes that fatal error I think of being so worried about losing Max that she suffocates him and causes him to back away, which causes her to push even harder. It all comes from a place of vulnerability, but you… start to see that they’re not that really compatible. She can’t see that – she just doesn’t want to lose him. So he finally gets the courage to break up with her and she ends up getting hit by a car, meets her fate and comes back as a zombie. And when she comes back as a zombie she’s still Evelyn, but times 10 — she’s lost a bit of her rationality, and any filter, really. So it’s very fun to play — she turns into almost this bi-polar character once she’s a zombie. She has this overwhelming need to have this Stepford Wife-type perfect relationship with Max. It’s an amplification of who she was before, and she becomes so blind to the reality of things with Max that she doesn’t even she that she’s deteriorating. Yes, she knows that she’s dead, but she doesn’t quite [get that] she smells horrible and is horrific to look at. My hope is that the audience will in some way or form sympathize with her a bit, because she’s such a lost soul. But it’s a bit funny, too.

ShockYa: I remember when Zack Snyder’s “Dawn of the Dead” remake came out, there was this whole debate about fast zombies versus slow zombies, and zombie films more broadly — the rules of them, and what behaviors zombies exhibit. As Evelyn, you’re a zombie, but just going on about your life. Is the manifestation of zombiedom in ”Burying the Ex” mainly just about strength and –

AG: — then also deterioration? (laughs) I think … generally what you see with zombies is that you’re bitten, and immediately see the effects of that, of being turned into this mindless drone. With this film (laughs) – it’s funny because I feel like I just did this with vampires and now I’m doing it with zombies – she’s the cutest zombie you’ve probably ever seen, if you can say that. She’s wearing cute little pajamas. The thing you see the most is her physical deterioration. Toward the end I think you do see a bit of a mental deterioration and a loss of rationalization, but you don’t see that drooling, dead-eyed zombie that we’re used to seeing in most zombie films.

ShockYa: So she obviously retains all her higher functions, right?

AG: I think she’s almost more terrifying because she’s a scorned woman zombie. (laughs) She comes back wanting revenge, and acts off of things that [women] actually react off of — jealousy, anger, hurt and fear, vulnerability and loss. She still has all of those personality traits, which almost makes her creepier, because you don’t really know what you’re going to get with her. You just don’t want to piss her off, because you do know that when that happens there are negative effects. She can’t control her temper, really.

ShockYa: I’ve had the chance to see “CBGB” and some of the other indie films you’ve done over the last couple years. Is there an excitement in branching out now, and really mixing it up in terms of differently sized shows, and also genres?

AG: Yes, because I was in this Groundhog’s Day of “Twilight,” really, and every year for five years I was the same character. We did get to have fun with her — different directors came in and had different notes, so it remained fun. I enjoyed it, and it was great for all of our fans in the world, but both they and more particularly everyone in the industry here — that’s all they ever really knew or saw of me, so it’s been fun to get to take on different characters who are generally nothing like the ones I’ve done before. “CBGB” was one – it was this piece of history that has impacted people and been part of their lives, and it’s always fun to tell a story like that, and show people sides of [a story] that they haven’t seen before. Growing up, I remember seeing certain movies and being really affected by them and not even understanding why at first. And I remember thinking, “I want to do that to people.” It’s such a beautiful thing when you get it right. And so I’m kind of interested in playing characters… and seeing if they can impact other people the way certain movies and characters did me.
Honestly, that’s how it was with Alice Cullen and “Twilight” as well — she was the character that I gravitated toward most. I just loved her and I didn’t know quite why. I also think accents are very fun. Part of the fun of acting is that element of dress-up — even with something like this {gesturing at pajamas and zombie make-up}, it really puts you into character in a way that other roles may not be able to. Just walking around, it’s very fun to see the reactions people have when they’re not used to seeing you like this.

ShockYa: Those strong feelings as a kid you mentioned — was there a particular type or style of filmmaking or films that you most reacted to?

AG: I reacted to films that were mostly true stories, and films about overcoming hardship — about not being given opportunity, and having to overcome obstacles. For whatever reason… I remember with “Pursuit of Happyness” sobbing in the middle of the theater, sitting in between my mom and dad and trying to cover [it up]. And “North Country,” stuff like that. It’s nice for them to be able, as accurately as possible, to strongly effect people through telling someone else’s life story, these bad but beautiful stories.

ShockYa: You can be thrilled by fantastic sci-fi or action films and caught up in the spectacle, but I feel like there will always be a market for those [types of movies] because people like feelings that have a place of purchase, if that makes sense.

AG: That’s true. Also, it’s probably part of growing up and getting older… but even in this, for instance, a film about a zombie girlfriend who just won’t quit, there are moments where I feel so bad for Evelyn, and wish she could step back and see what she’s doing. Even with stuff like this, I feel like you can find things that make any character real in some way. … No villain thinks they’re the villain. They think that they’re right, because whatever’s been done to them is wrong, and they’re reacting to that.
Full interv at source
Upplagd av rosebellas kl. 23:19