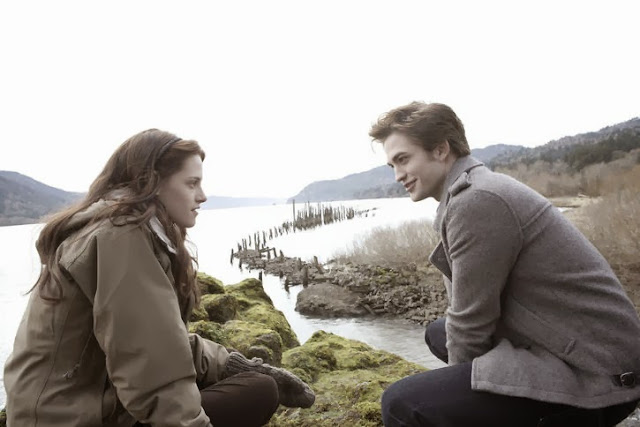 Love 'Hunger Games'? Thank 'Twilight'
Forbes As fans eagerly await the first public screenings of The Hunger Games: Catching Fire (tonight at 8pm), they should take a moment to thank the film that made it possible. Today marks the fifth anniversary of the release of Catherine Hardwicke’s Twilight. It’s a milestone worth celebrating, even if it’s more popular to only deride the five-film franchise as somehow harmful to cinema and society as a whole. It’s no secret that mainstream media aimed at women and minorities are often held to a higher moral standard than those aimed at white males and the Kristen Stewart/Robert Pattinson romantic drama was no exception. But putting aside the debates about its quality or its morality (because male-centric blockbusters are all superb and have no grey morality), it is clear five years later that Twilight had the most positive effect on gender parity in mainstream films than any other film of this generation.

You’d think that Hollywood would have noticed the $1.8 billion success of James Cameron’s epic romance Titanic back in 1997 which was partially fueled by younger women seeing the film countless times in theaters. But instead of crafting big-budget entries centered around females, studios merely spent the next decade increasing the arbitrary young-love quotient in male-centric films like Armageddon and The Patriot. Even animation, once a place for female-centric narratives like Pocahontas or Anastasia became a proverbial boy’s club in the wake of Shrek and Pixar’s rise to the degree that Brave was considered a “big deal” in 2012. By the time Twilight rolled around, the conventional wisdom was that female-centric films were tantamount of box office poison due to the whole “girls will see boy films but boys won’t see girl films” cliche.

Female-centric hits like Deep Impact, Charlie’s Angels, Sex & the City: The Movie, or Mama Mia! were written off as flukes and not to be used as a template for success, while female-centric flops like Electra or Catwoman was held up as proof that female-driven superheroes were box office poison. But Twilight kick-started its franchise five years ago with a stunning $69 million opening weekend and eventually earned $392m worldwide on a $38m budget. Unlike the quick-kill sequels which generally opened over/under $140m and ended up over/under $290m domestic, it didn’t collapse after opening weekend, earning $192m off that $69m debut weekend, a solid 2.76x multiplier. Its fan base peaked at New Moon, but it along with the Harry Potter sequels, helped prove that you didn’t need to expand your fan base if that fan base was big enough.

Twilight and its respective sequels finally and indisputably proved that there was a real and potent market for blockbuster franchises explicitly aimed at, and unquestionably about, women. When The Twilight Saga: New Moon shocked the industry by opening with $142 million four years ago this weekend, the most interesting statistic was that the audience was 80% women. Aside from a missed marketing opportunity for Ninja Assassin  (“So, your girlfriend dragged you to New Moon, now it’s YOUR turn to pick the movie!”), the stat showed that even if not a single ticket buyer for New Moon had been male, the film still would have snagged the biggest opening weekend of 2009. This was hard proof that a film entirely targeted at females, centered around a female, and concerning the narrative journey of a female, could attract genuine blockbuster dollars without the male audience.

I won’t hold the films up as high art but nor would I needlessly denigrate them. I like Hardwicke’s quirky and self-aware original quite a bit thanks to its delightful supporting cast (Billy Burke is arguably the series’s unsung hero). Bill Condon’s series finale contains (no spoilers) one of the all-time great ‘the theater goes crazy” climactic shockers and one of the all-time great super-powered action sequences. The franchise dragged a bit in the middle chapters, partially due to the kind of fan-service fidelity that wouldn’t be out of place in today’s Marvel films (cough-Coulson-cough). Also, unlike most franchises that were anchored by action and spectacle (or at least marketed as such), Twilight films were firmly rooted in character interaction and romantic melodrama. Twilight Saga wasn’t just a female-centric blockbuster franchise, it was one that wasn’t merely a case of putting a female in a stereo-typically male-centric action picture and calling it progressive ( IE – what Sucker Punch tried to satirize).

We can debate the franchise’s complicated moral compass, but I would argue fans no more wholeheartedly endorsed the franchise’s somewhat questionable gender politics than the fandom of Transformers automatically became neoconservative hawks. It can even be argued that Ana Kendrick’s wise and thoughtful best buddy, Billy Burke’s sympathetic father, as well as other members of the Cullen clan all convincingly spoke for the nay-sayers as a counterpoint to those rooting for a Bella/Edward courtship (Bella’s journey is arguably closest to The Little Mermaid and Beauty and the Beast than something like Grease). The packed audience of “Twi-hards” with which I watched Breaking Dawn part II were a rabid and excited bunch that laughed in all the same spots as the detractors did and watched with glee rather than reverence. They were just laughing with the films instead of at them and frankly their joy was infectious.

Frankly a big reason why the Twilight Saga was such a bit hit with women is because, well, it actually had many women in starring and supporting roles. For genre fans who wanted to see the female gender represented onscreen by more than one token or two token hot girls in a given blockbuster franchise (re – the “Smurfette Syndrome”), Twilight was pretty much the only game in town. In an era when Alice Eve in her panties is a key Star Trek Into Darkness promotional image and Thor: The Dark World gets held up as a big deal in superhero cinema because it contains four (!) female supporting characters, the Twilight Saga stood out by virtue of its assortment of females who expressed differing opinions about the story as it unfolded. There were plenty of blockbusters with strong female characters in co-leading roles (Pirates of the Caribbean, Avatar, etc.), but Twilight was rare in that it was completely anchored around a teen girl’s journey, something rare even 25+ years after the underrated and unapologetically feminist/progressive Dirty Dancing.

In the end, the five-film franchise made $3.3 billion in combined worldwide grosses off a combined production budget of $385 million. It started with a stunning $35 million opening day gross for the first Twilight, five years ago today, and continued to shatter box office records (it broke the midnight record twice, in 2009 and 2010) and destroy pretty much all conventional wisdom about what kind of films could be blockbusters. The most important legacy of Twilight isn’t the stardom of Kristen Stewart and Robert Pattinson, nor the critical debates the films caused over their subtexts, or even the individual successes of each installment or the copycats it inspired. Twilight‘s legacy is that it proved once and for all that females were a strong enough movie going demographic to power a franchise to blockbuster heights all by themselves.

T-02244Twilight begat The Hunger Games which begat a flurry of would-be fantasy franchises. No matter if Divergent or Fifty Shades of Grey hit anywhere near the heights of even the first Twilight or ends up in the dustbin of franchise history alongside The Host, the notion of a female-centric blockbuster franchise as a viable investment is here to stay. Five years ago, Twilight proved once-and-for-all that the female-centric blockbuster was no fluke and no fallacy. It proved that you didn’t need the elusive male “cross-over” audience, and it proved that you didn’t need to expand your targeted fan base if your fan base was big enough already, a lesson currently being taken to heart by films like Instructions Not Included and The Best Man Holiday.

Love Twilight or hate Twilight (I’m firmly in the “like” category), the Bella/Edward romantic fantasy was in its own way the most feminist franchise in recent memory.