Rob And Benedict Cumberbatch To Star In "Lost City Of Z" 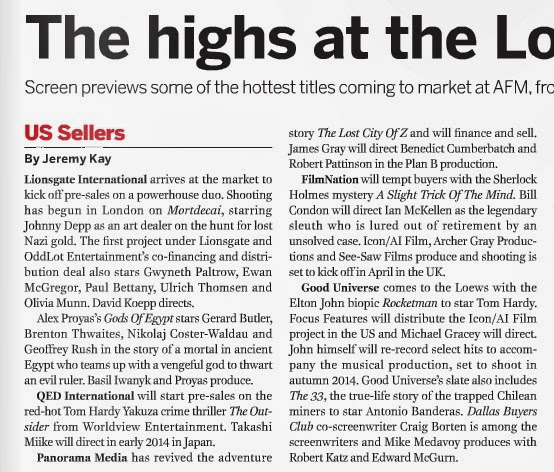 According to Variety the movie will shoot Summer 2014
Panorama, headed by industry vets Marc Butan and Kim Fox, comes to AFM with “Pride and Prejudice and Zombies,” Jessica Chastain’s “The Zookeeper’s Wife” and James Gray’s “Lost City of Z,” starring Robert Pattinson and Benedict Cumberbatch.

Fox said the evolution of digital platforms has not gained at a fast enough clip to make up for the decline in DVD. “Zookeeper’s Wife” is shooting next year and advance sales have been made in 90% of world markets and “Lost City of Z” is shooting this summer. And Panorama will be starting sales on John Hillcoat’s crime thriller “999.”

The Wrap also confirmed the news
David Grann’s acclaimed book serves as the basis for the movie, which Brad Pitt is producing under his Plan B banner

Robert Pattinson will join Benedict Cumberbatch in James Gray’s “The Lost City of Z,” an individual familiar with the long-gestating project has told TheWrap.

Brad Pitt was initially attached to star in the adaptation of David Grann’s acclaimed book, though he’s now strictly producing the film through his Plan B banner along with Dede Gardner, Jeremy Kleiner and Anthony Katagas.

“Lost City of Z” follows Percy Fawcett, a British colonial who disappeared in the 1920s while searching for a mythical city in the Amazon jungles of Brazil that he believed he discovered on a prior expedition.

The Film Stage and The Playlist published articles about Rob joining the movie mentioning the Screendaily dailies as source. (click on the links to read the articles)

More details about The Lost City of Z

According to IMDb, Benedict Cumberbatch will play Colonel Percy Harrison Fawcett. No details about Rob's part. The synopsis:

In 1925, the legendary British explorer Percy Fawcett ventured into the Amazon jungle in search of a fabled civilization. He never returned.

In September, during the Toronto Film Festival, Variety and Deadline confirmed that Cumberbatch was in talks for the movie.

From Deadline
Benedict Cumberbatch is negotiating to star in Lost City Of Z, which James Gray will direct from a script he adapted. Panorama Media will finance the film and handle foreign sales.

The film is based on the David Grann bestselling book. Cumberbatch is in talks to play Percy Fawcett, who in 1925 headed into the depths of the Amazon jungles in Brazil. Fawcett was there to map the jungle and, hobbled by malaria, he discovered a mythical city he called The Lost City Of Z. Scorned by peers who claimed that this ancient kingdom was a fraud, Fawcett headed back into the jungle with his son and one other, braving the dangers of disease, insects, snakes, poison darts and other hazards to reinforce his discovery. None of them were ever seen again and it remains one of the great exploration mysteries of the 20th Century.

Plan B‘s Brad Pitt, Dede Gardner, Jeremy Kleiner and Anthony Katagas (who worked with Cumberbatch on 12 Years A Slave) will produce. Plan B has been developing the project for several years, and it initially seemed like Pitt would be heading into the jungles.

More details about the story - from an article from 2010 via Screendaily (at the time Brad Pitt was attached to the project)
Buyers have been flocking to the project, which is being styled in the vein of Lawrence Of Arabia and is based on Gray’s adapted screenplay of David Grann’s recent bestseller.

Fawcett developed an obsession for the Amazon and became convinced that an advanced civilisation lived within the interior after several adrenaline-fuelled expeditions where he narrowly escaped death from tribal encounters, deadly animals and devastating diseases.

He eventually lost backing for the trips and self-funded a final trek into the Amazon with his son from which neither returned.