Juliette Binoche talk about "Sils Maria" and more with @Variety 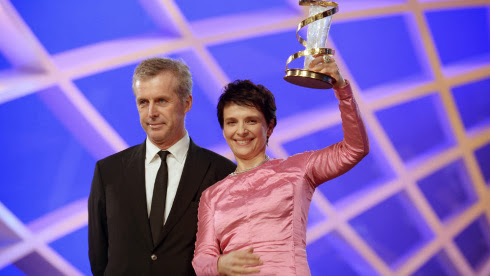 variety (..) You have such a long career and you’re still getting interesting parts in compelling movies. How do you think the parts you’re getting today differ from the ones when you were getting at an earlier stage in your career?

At the time I was given the parts. Now I’m going where I want to go. Like “Sils Maria,” I gave a phone call to Olivier to read the script, and he wrote a beautiful script. For “Godzilla,” no, I didn’t have to, but I wish I had.

In the U.S., there are many daring, ambitious films being made outside of the studio system. Do you have any projects set up in the U.S.?

Not at the moment, but I’m coming out of four films, so I’m not in a hurry, I’m knocked out.

Is there any particular issue you’re engaged in? Political, social…

A: “Making this film (“A Thousand Times Good Night”) is a political statement, in a way.

You mentioned you brought the original idea of “Sils Maria” to Olivier Assayas. Are you at all interested in directing?

Well, I brought him an idea of “Sils Maria,” but then it became his film. That was the beauty of it. I gave him sort of a sprout, and then after that, he went with it.

It was such a blessing to work with (Assayas). I made a film before with him, and I was angry with him because I felt we didn’t have a connection while shooting the first film, so I wondered who I was going to do ask to do this, and then I thought “Olivier,” because he missed me. When shooting I felt so blessed, thought that was my dream coming true.
Full interview, go to source :)

And Juliette Binoche is honored at the 13th International Film Festival of Marrakech, in Morocco 30/11/13 x48 HQ's: Here Tnxs @an1992an 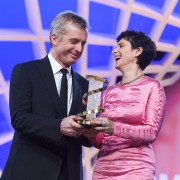