New Photos and Interview of Kristen for "Into the Gloss" intothegloss “If you looked at pictures of me when I was 14 or 15, you couldn’t tell the difference between me and my brothers. I looked like a boy, fully. I really like extremes. I wear jeans and t-shirts and am a total tomboy, but at the same time, when I pull out all the stops [for an event], I want to fucking go for it, polarized in the other direction from my reality. Everything Balenciaga makes is beautiful; watching their runway shows is like watching a movie. But wearing it is not the easiest thing. It’s tough to integrate that type of thing into your life. But when you can do it—wear something unexpected, with your personal style—it’s incredibly badass.

I still really don’t know how to do my own makeup. I do the same thing every day, if I do my own: mascara and black eyeliner. I’m a bit of a raccoon—I already have dark eyes—so I just make them a little bit darker. One of my makeup artists, Jill Dempsey, made an eyeliner that I really dig, but I don’t think she’s making any more, which is a bummer. I just use whatever black liner. There’s a pencil that you can get at Topshop that’s cheap, so I’ll get, like, five of them, and they last forever and they’re really, really good. I do both the top and bottom line and then just smudge it with my finger. I don’t have a favorite mascara, genuinely. I like it clumpy, though—I’ll use anything if it’s clumpy, black, and it works. I don’t mind it being really cakey and heavy.

If I’m being responsible, I’ll wash my face, but I never take off my eyeliner or my mascara because it looks so good the next day. It’s a continuous thing; I think I’ve never really had clean eyes. [Laughs] For my skin, I use the whole Proactive system. It really, really works for me; I’ve used it since I was a teenager, a young teenager. I feel like I’m a total spokesperson for them because it really did help me and I’m always telling people, ‘Oh, dude!’ and mentioning it in interviews, but I can’t imagine doing one of their commercials. I don’t think they’d want me to, to be honest. Better in print. [Laughs]

If I wasn’t an actor, I would definitely do things to my hair. I would cut it more, I would dye it more. At some point I want to do a total boy cut, completely—not a pretty, girly version—like a straight up James Dean haircut. And then, I’m definitely going to shave my head before I die. I will definitely tattoo my head while it’s shaved before my hair grows back. I’m not sure which part, probably the bottom quadrant in the back. I don’t know what the tattoo would be, yet. Still thinking.

I try not to force anything. For a shoot, if you can find one or two things that make you genuinely smile, it helps, rather than trying to think about taking beautiful photos. Because, in the moment, you’re literally so surrounded, you can’t think about every angle. I just try to breathe through it. It’s not my favorite thing, but I’ve gotten better than when I was younger. If you feel comfortable, you’ll look comfortable. For example, I feel like when I put my arm up, I’m not comfortable. That’s like a, ‘Oh, fuck, I don’t know what to do with myself’ look. Usually, if I’m feeling it and I’m comfortable, hands are down. I try to act natural.

I, personally, want to stay neutral so that I’m in a perfect position to, it sounds lame, but to transform myself for a role. If a project comes up and I’ve already got a shaved head, it would be a problem; I hate wearing wigs. But the way I choose roles anyway is very gut-oriented.

As long as I feel solid about my creative choices, people can have whatever image or perception of me that they’d like. You can’t think that someone’s impression of you is wrong—it’s their impression—and, therefore, you really can’t worry about it. So many people have developed their impressions based on fucking bullshit, and you’ll never do anything true to yourself, you’ll never make the art you want to make, if you’re concerned about that. At the same time, I’m a 23 year-old. I like clothes, but that’s not because I’m like, ‘Oh my god! I need to stay relevant!’ [Laughs]”

—as told to ITG

Kristen Stewart photographed by Emily Weiss in New York on January 24, 2014. In addition to being more awesome in person than you even imagined, Kristen is the face of Balenciaga's newest fragrance, Rosabotanica. Try it here.

Via kstewartfans
*TheFashioCourt Kristen Stewart in a BALENCIAGA Spring 2014 top while doing press for #ROSABOTANICA. 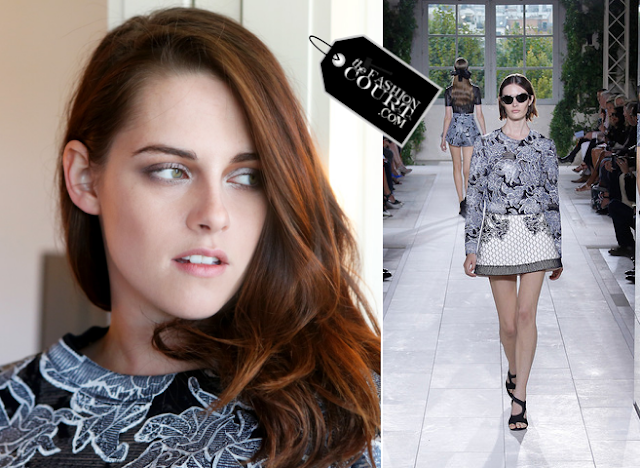