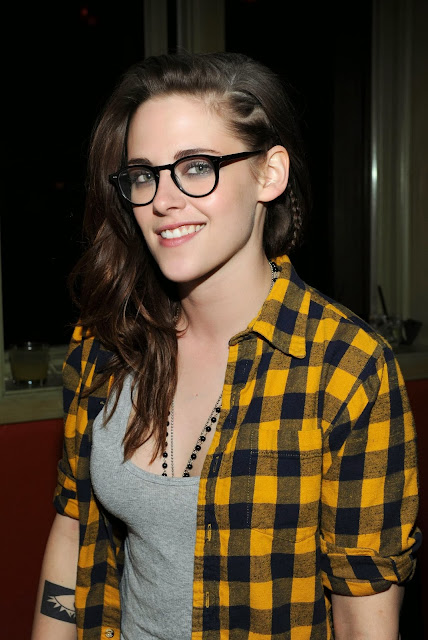 Q&A: Kristen Stewart on Dry Shampoo, Puffy Faces, and Cornrows
nymag.com "Kristen, you have a little something in your hair," one of Kristen Stewart's people says during our interview in her hotel room, flicking a little piece of fuzz out of her side-parted hair. She turns back to me, mock-yelling. "Thanks a lot!
You weren't going to tell me it was there?" Stewart is nonchalant about the fuzz because 1. Her hair looks glossy and good anyway; and 2. She doesn't spend much time thinking about beauty. Throughout our interview about her beauty routine and her repeat involvement with Balenciaga as the face of its new fragrance, Rosabotanica, Stewart has to resist the urge to air-quote the word beauty. The Cut talked to Stewart about her preference for puffy faces, gardenias, and hatred for hotelshampoo.

How do you use scent as part of your acting process?

Whenever I encounter a product that I’ve used on a previous movie, it will take me right back. [Snaps.) Sometimes there will be things I can’t use, even though it might work for a beauty regimen or something that works for the character. I’ll literally have to find another product to use.

So, something like really basic dry shampoo. I used it on The Runaways, and Joan uses that as well. I couldn’t use it anymore. I was just too reminiscent. Also certain lotions, and Rosebud, that chapstick in a tub? Rosebud lip salve. I used that on some movie when I was younger and then I used it again. And then it was like Whoa. It was too much. But with fragrance, no, it’s not a huge part of my process.

What was your first scent memory?

My favorite flower is a gardenia. My grandma had a big gardenia bush. And gardenias aren’t that common. When you find them, it’s always like, Oh, nice. And it’s my favorite flower now too, because of that.

How was the creative process for Florabotanica different than Rosabotanica?

My involvement didn’t change much, to be honest. I get to use it. I have nothing to do with making the fragrance. I just get to stand by and watch people do awesome things. I’m really close with Nicolas [Ghesquière] and this whole story behind it has been really cool. You don’t always find, in fashion, such developed stories. Sometimes it’s a bit more about how something looks, and ends there. Or with fragrance, this is a pretty picture and sells this perfume. This is a little more fun because it is about telling a story. That’s whyI’m into it and why I got into acting.

Florabotanica and Rosabotanica have the same setting. But with Rosabotanica, it’s about someone who has turned from a wide-eyed, yet hungry, fresh, green person. It’s someone who has been in this extreme environment and survived it. She’s grown with it. She’s taken the aspects she’s appreciated out of that environment and ignored the rest. She becomes a part of her environment instead of becoming this Alice in Wonderland type of girl who’s looking around and doesn’t recognize anything. It’s growing on her.

What has surprised you about scent?

Probably that I like it? I was never really a fan of the idea of putting on some synthetic scent. I didn’t like the idea of it. But when I started using it, it became a part of me. It felt natural.

Some perfumes just smell awful. They smell like your grandmother. This one never did to me. I genuinely use Flora all the time. Rosabotanica is a deeper scent to me than Flora. In this one, the rose is pretty strong. It’s [a] muskier fragrance. It’s the nighttime version, more serious. This is vague and kind of silly, but it’s like New York versus L.A. Or night versus day. Or red versus white. It’s the darker version of it.

I saw you got rid of your cornrows.

Yeah, I took those out literally yesterday. They last about a week or so, if you are hard on your hair, which I am. I’ll re-do it at some point. I liked having it. It’s comfortable and keeps my hair out of my face. And I liked the way it looked. But you need to re-do it once a week, or else it will start to look gross. They were fuzzy.

I use Proactiv. It works. It’s really good. I’ve used it for a long time. I’m reliant on it. I use their three-step [system]. And I try to moisturize more than I ever had. Apparently, that’s good for you. That’s about it. I drink a lot of water. Like, if you don’t drink water, you look awful. If you do, that’s a huge part of my “beauty” regimen, I guess.

I use mascara, eyeliner, and maybe some concealer. Chapstick. I don’t like color on my lips unless I’m doing full-on.

I don’t do much with my hair. When I’m working, I treat it so often. There’s heat or color on it. When I’m not working, I just like to let it be healthy. I don’t wash it every day. I like to switch up my shampoo. I like Kerastase a lot. I like using, going back and forth, using fully organic. People give me a lot of shampoo and conditioner, so I’m always like, what is that? I don’t always necessarily know what I’m using.

So you’re not using hotel shampoo.

I hate when I forget shampoo and I have to use it. Only because afterwards it feels bone-dry.

Or it feels limp.

Or that. And flat. Totally.

How do you view beauty and your beauty regimen as part of your day-to-day routine?

I’m super lucky because my job allows me to have fun and take things to the extremes. When I’m not working, I have a really basic regimen. I don’t think too much about my clothes [gesturing]. I don’t wear a lot of makeup. I’m always striving to get to the point where I look like I’ve woken up in the last hour. You know that look you get when you’re fresh-faced? You’re a little puffy but looking really good? That’s what I like.

How do you keep that going throughout the day?

I mean. It doesn’t. But that’s okay. I just like it when people look like they’re not trying. And the only way to do that is by not trying.
Upplagd av rosebellas kl. 19:47