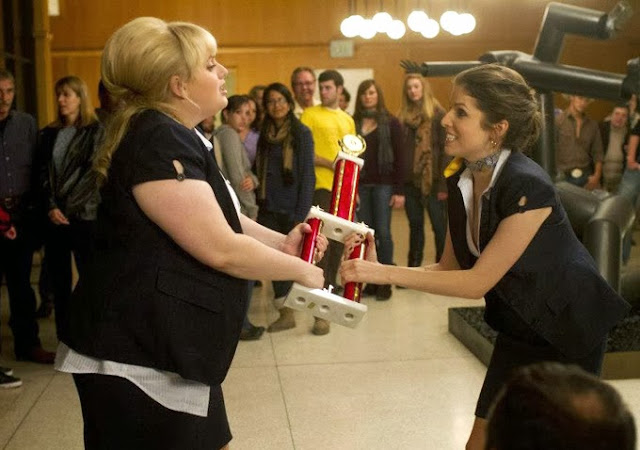 ETA:
Elizabeth BanksReveals Some Details About The Script .. "I was on as producer for the first film and have been with the movie since its inception, so this next time around I’m just taking on a lot more responsibility," Banks told HuffPost Entertainment while promoting her partnership with Listerine and the brand's 21 Day Challenge on Feb. 13. "I still want to bring as much laughter and humor and joyfulness and great music to the franchise that I can."

Earlier this month, it was announced that Anna Kendrick and Rebel Wilson will return for the sequel, and Banks says she's thrilled to work with them again.

"I’m really excited to direct the girls," she said. "The whole project speaks so much to me and to women and to making women funny in really fun and interesting ways and that’s what I’m most looking forward to. I’m looking forward to letting the girls let loose."

As for the script, Banks was tight-lipped, but did reveal some minor tidbits.

"All I can say right now is that they will be graduating seniors this time around, rather than incoming freshmen."

indiewire  How could you make a "Pitch Perfect" sequel, with its two main stars? That would be likel making a "Bring It On" sequel without Kirsten Dunst and Eliza Dushku....oh wait.... Well, not to fear. Universal Pictures won't be making that kind of mistake again.

The studio has officially confirmed, what we already knew for a while now: Anna Kendrick and Rebel Wilson will be back to turn your favorite songs of yesteryear into acapella awesomeness in "Pitch Perfect 2." So yes, the Barden Bellas are back, with Elizabeth Banks directing the sequel from a script by Kay Cannon. As for plot details? None yet, but really, the reason you're coming back is for the music, not for the "saga. "The story is a conduit for the songs, so uh, bring it on. PITCH PERFECT 2
The Barden Bellas are back in PITCH PERFECT 2, the follow-up to summer 2012’s smash hit.
The comedy will be helmed by Elizabeth Banks, co-star and producer ofPitch Perfect, and produced by Paul Brooks, Max Handelman and Banks.
Writer Kay Cannon returns to the team to pen the next chapter.collider
Upplagd av rosebellas kl. 04:00