LATimes Organizers of the annual Red Carpet Green Dress challenge announced Tuesday that Kellan Lutz will be wearing the contest's first winning sustainable tuxedo -- designed by New Zealand designer Jomnarn Dul -- down the Academy Awards red carpet on March 2.
The eco-fashion awareness campaign, now in its fifth year, is the brainchild of Suzy Amis Cameron, and showcases eco-friendly fashion by getting high-profile celebrities to wear sustainable formalwear on the Oscars red carpet.

Until the current challenge - which began accepting submissions back in October -- there had not been a menswear component to the program. Lutz (from the "Twilight" franchise and "The Legend of Hercules" -- and whom we recently spotted sitting front row at the Black Sail by Nautica runway show during New York Fashion Week) will sport the inaugural tux.

The winning design was submitted by 23-year-old Dul, who studied menswear at Auckland's AUT University and works for New Zealand menswear brand H. Brothers. (This apparently isn't the designer's first experience with eco-fashion -- according to the announcement she's also designed a range of suits that incorporate recycled plastic bottles as part of an H. Brothers collaboration with Ekocycle.

The challenge pairs each winning designer with a mentor and Dul's is fashion designer and artist Jeff Garner (known for his plant-dyed garments, Garner was dubbed "Eco-Designer of the Year" by men's magazine GQ in 2010).

The winner -- and wearer -- of the women's Red Carpet Green Dress challenge are expected to be announced on Feb. 25.

tvnz Jomnarn Dul, a 23-year-old designer from Auckland, won the Global Red Carpet Green Dress design competition for her sustainable tuxedo made from recycled fabric. Her work will be worn on red carpet by Twilight star Kellan Lutz, with Ms Dul personally fitting the suit. "He's just going to be beautiful in my design, and the fabrics are going to be so nice and silky," she says. video 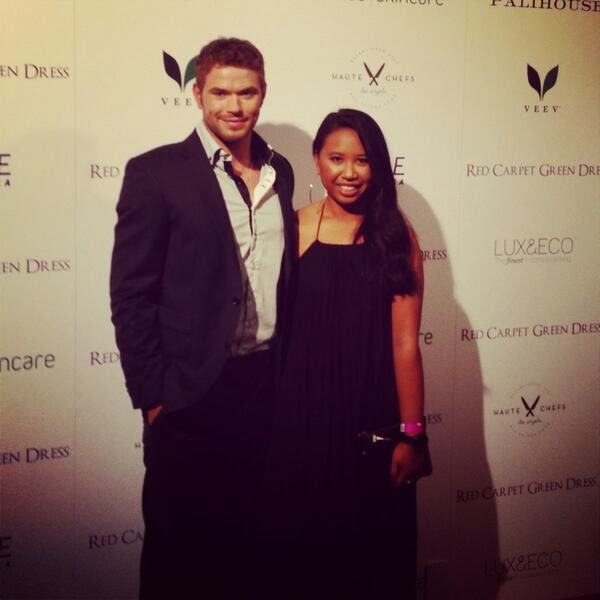