One Day in Ripper Street - Myanna Buring and cast interview 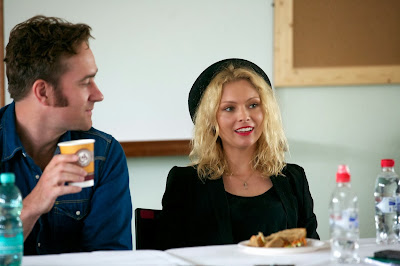 thecustardtv When I woke up on the morning of July 23rd the heavens had opened. The first few hours of the morning saw biblical amounts of rain and lightning that could lit up every room of the house. Weather of this brutal nature would normally cause me to bury my head deeper within the warmth of my covers and drift off back to sleep, but this morning I was off to Ripper Street!
The short flight to Dublin was surprisingly smooth given the weather we had experienced earlier in the day and it wasn't long until we (me and every other journalist) where piled onto a bus and driven to the army barracks which is magically transformed into the dirty streets of East London that we know on Ripper Street. I've been to a fair few sets this year but none with quite the grandeur and scale of this. For a spilt second it doesn't seem real and then after you've stepped onto the cobbles and peered down the various alleyways and tunnels you forget you're on  a set at all.
The design team here have excelled themselves. Every nook of Ripper Street feels wonderfully authentic. There are elements to the set that you don't even notice from the comfort of your sofa. The posters, the toilets, the signs every element adds to the fantastic atmosphere that oozes from the screen.

So what was it like being reunited after a long break for season 2?
Matthew Macfadyen: It was quite odd, it was really like no time had passed.
Adam Rothenberg: It was really very casual because a lot of people had been working here throughout the year. We were the only ones who had been away.  No one was particularly enthused to see us again!

Had you all kept in touch during the break?
Matthew Macfadyen: We went to LA to do the launch of this on BBC America so we met up there and MyAnna and me did a job together.."
(..)
After our wander down the infamous street the cast (Matthew Mcfadyen, Adam Rothenberg, MyAnna Buring and Jerome Flynn) joined us for a Q&A and discussed the reactions to series 1 as well as what we can expect from the upcoming second run.

How do you enjoy the costume aspect to it?
MyAnna Buring: You're looking at me in particular aren't you! The corset is a love/hate thing. Some days it's fantastic, others you can't move. They help a  lot with the character, you walk in a different way you've got a different posture. Long Susan's dresses are incredible. The craftsmanship is something really special.

MyAnna can you tell us what happens with you in this series?
MyAnna Buring: Charlene has left the brothel and gone into Music Hall and Long Susan supports it. She takes Jackson to watch her do her thing.  When we start off we find Long Susan and Jackson attempting marital bliss. It's hard from them to walk away, they don't have the finances and I've always felt Long Susan wasn't just doing it for the money, she's still got quite feminist feelings and agendas.

Were you happy with how the stories have gone in season 2?
Matthew Macfadyen: You can see the writers having more fun and taking risks.
MyAnna Buring: Little scenes get written in like us having tea, you can start playing with subtleties.
Adam Rothenberg: The characters discover each other which is new.
You see behaviour and see people starting to inhabit and live together. It's a drama about characters.
Full interview at source