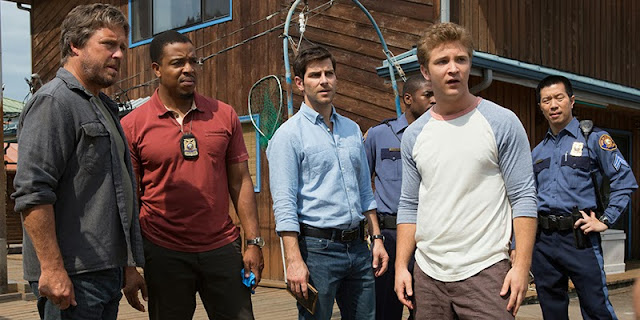 “More and more she grew to love human beings, and wished that she could leave the sea and live among them." — Grimm

“One Night Stand” will leave you feeling a bit parched and waterlogged at the same time. “One Night Stand” is interesting in that it provides not only a new species of Wesen but also highlighting Nick’s (David Giuntoli) newly enhanced Grimm powers, however, I feel like it is a filler episode with a lackluster fight scene on the docks. I’m also getting an uneasy feeling about Nick’s Grimm prowess being heightened because something just isn’t right about it.

Jake (Michael Welch) and his pal Dan (Pritesh Shah) meet two pretty sisters Sarah (Sara Fletcher) and Anna (Lauren Luiz). Fade in to the young couples having fun on a lakeside beach; one thing leads to another and then someone is dragged underwater and drowned by a mysterious creature. Just another lovely afternoon in Portland, right? More at source..