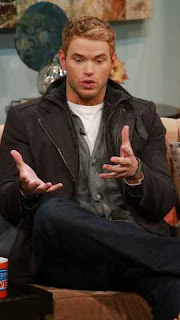 accesshollywood Kellan Lutz stops by Access Hollywood Live on November 25, 2013CaptionCould “The Twilight Saga” fans ever imagine Kristen Stewart pining away for an Edward Cullen played by Kellan Lutz – because the actor was sought after for the role played by Robert Pattinson, but turned it down.

“I really wanted to play a happy role or no role for a little bit,” he told Billy Bush and Kit Hoover, explaining that his role in “Generation Kill” left him wanting something more upbeat.

“I didn’t care to audition for [the role of Edward] because he was a bit moody and emotionally challenged,” the 28-year-old, who played Edward’s brother, Emmett Cullen, in the series, continued.

“But then I loved Emmett… I’m so blessed to have been able to play him,” he said.

And Kellan is open to playing a vampire yet again – if another movie were to ever happen.

“I love everyone. I loved to work with everyone and I loved my role,” he explained. “I’d love to play Emmett again or even another role in it.”

First up, fans will see Kellan play a demigod in “Hercules: The Legend Begins,” something he physically worked hard to accomplish in way you might not expect.

“I pushed myself. I’m a bigger guy by nature and [director Renny Harlin] wanted me trimmed down,” he told Billy and Kit.

Kellan explained that his take on the beloved mythology character will have a different spin than the Dwayane Johnson project about the same character.

“The Rock is doing Hercules [too]. I love the Rock. He’s naturally big and strong and he has amazing DNA,” he said. “And for me, I couldn’t get that big and thank God [the director] said, ‘I don’t want you that big.’”