Update: David Michôd Talks About Rob and "The Rover" at @Flickerfest 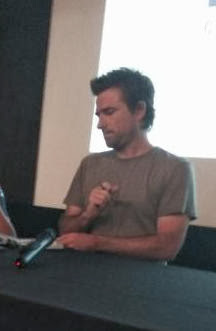 David talks Rob and The Rover

I can’t tell you enough how much praise David heaps on Rob.  David said he “loves talented people”.  (Vertigo – David’s face genuinely lit up when he talked about Rob – such a heart starter) He also said numerous times how smart Rob is.  Really smart.

David said he finished The Rover about one to one and a half months ago and that noone has seen it yet.  He wanted to bring a teaser for us today, but he just wasn’t ready to reveal it yet.  Did we groan.  Yes we did.  Did he look at us – hahaha oops – really that should have been a red flag to him about us.  He said they are rolling it out and showing it to people over the next few months.  He said he felt the same at the end of The Rover as he did with Animal Kingdom.   (That’s a good comment since I’ve seen some people assume he’s nervous about releasing this film – there were no nerves there today about it.  He’s really proud of it). (Vertigo – he seems very excited about it’s up coming release.  We know how that feels!)

David “absolutely loved the work done by Guy and Rob.  They created great characters and loved their performances”.

He said Rob had painted himself into a “luxurious corner” over the last few years.  That he’s a “really smart guy and he knows exactly what he wants to do to build the career that he wants”.    Rob was “incredibly hardworking and a fun guy to work with” and that “he’s a really good actor”.  Of course Rob thinks he’s a really bad actor, but it wasn’t long before David realised that “that was Rob’s schtick”.   Another story David relayed was that Rob wanted to make sure that Scoot McNairy and his accents were similar since Scoot plays Rob’s older brother in the film.   So Rob spoke to Scoot over the phone about the accents because Rob was worried about screwing up the Texan accent (Scoot is Texan in case you don’t know).  When Scoot heard Rob’s accent he said “that guy knows exactly what he’s doing he just playing dumb”.  Scoot said Rob’s Texan accent was perfect. (Vertigo – Rob nails another challenge. Check!)
(..)
David’s really interested in how this film will translate with Rob’s fans.  He’s curious to know how they will receive Rob in this role.  I told him his fans are already beyond excited and highly anticipating this film.  And I hope we get the trailer soon because I’m kind of tired of seeing “I want the Rover trailer and now” on Twitter.  I’m not so impatient because I know he will give it to us when he’s absolutely ready to.  But I told him I’d get the info about Rob’s fans reactions to him once movie has been released.

I asked David whether there will be an Aussie premiere.  He said he expects there will be – he just isn’t sure where that will be but there should be something.

He just raved about Rob.  He said Rob’s performance in this film is amazing and I can tell you he was pretty genuine about it.

David asked us if we had met Rob.  I said – we sure have.  We endured hail, torrential rain and wind when he was here for the last Twi film and I said I thought he was such a sweetheart.  (Vertigo – I think we blurted out “sweetheart” in unison lol) David said – he really is – he’s such a great guy.  And it was said with genuine reverence.

By the way whilst this conversation was happening – other people (like Rachel Ward) would interrupt.  I love that David continued chatting with us and kept Rachel waiting.  Vertigo will confirm that she may have looked over a few times hoping we would shut the hell up. (Vertigo- *nods* I think poor Rachel was not amused – but David is so down to earth he seemed content to give us his undivided attention. What a man!)

Do you want some 6 degrees of Rob and David again – I don’t think this is something David will mind if I share, but he told us how his housemate “Luke” actually wrote the script for “Life” that Rob will be shooting soon.  My only regret – Luke was actually there and left before David’s session finished.  One other guy walked past David and us just after we spoke about that and I said – was that Luke?  No David said with a laugh.  You know I would have interrogated him too.

There’s more but I just can’t remember  – Vertigo will update this when she gets home with anything I’ve missed, but on parting with David I said – one last thing.  What would you tell RPAU’s followers / Rob’s fans about Rob that you can tell us about The Rover.
David thought about it and then he said with so much emphasis. “I know what you can say – you can say that I think “Rob is REMARKABLE”.

Via RPLife_
David Michôd was at Flickerfest this morning (Jan 17th) in Sydney and talked a bit about Rob and 'The Rover'.

@Roaford was there and here's a compilation of her tweets about what Michôd said about the movie. 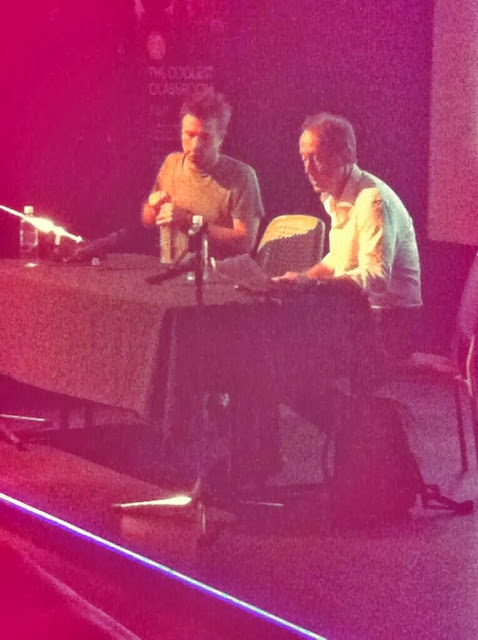 They didn't talk about The Rover much but what David did say was it's finished. He completed it a month and a half ago, but the teaser isn't ready yet.

He cast Rob cause he could see the hunger and determination he has towards the career he ultimately wants.

David said Rob is one of the smartest guys he's worked with said he just a fun guy to be around.

In The Rover, Scoot and Rob's characters are from Texas so they'll both have Texan accents. David said Rob was worried about but said he nailed it.

David said he set out to make a more commercial movie after Animal Kingdom but it ended up being darker.

David said Rob and Guy are phenomenal in The Rover and it's the best work they've ever done.

David told us a story of how he saw Rob walking up the street by himself in Corn. Rob told David that it was the most magical experience to be able to do that.
Upplagd av rosebellas kl. 04:41