Kristen Stewart on Scent, Smoky Eyes, and Her Strange Aversion to Peplums 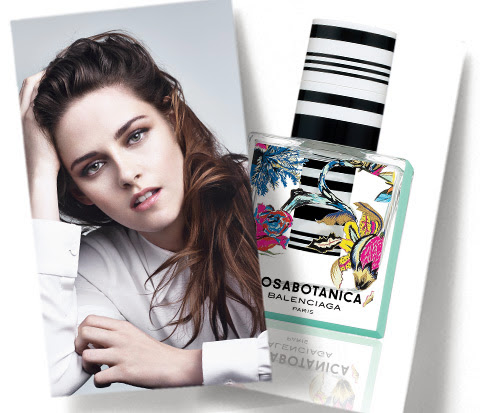 style Sitting down with Kristen Stewart, I knew I wasn’t in for an interview with your typical, perky perfume spokeswoman who wants to pose for selfies and gab about her go-to mascara (although I asked).
She was surprisingly real—wearing a black Balenciaga leather jacket, no nail polish, and her signature mussed-up waves. She was also very candid about the fact that what you see on the red carpet is the product of a talented team—she wakes up with “raccoon eyes” just like the rest of us. And if you’re wondering:
She smiled and laughed. Here, Stewart reveals her thoughts on the new Rosabotanica fragrance from Balenciaga (for which she is the face) and the two things you’ll never see her wear.
—Amber Kallor

What do you like most about Rosabotanica?
It’s the perfect counterpart to Florabotanica, which I really grew to love and use constantly. I haven’t had much experience with fragrance, so it’s nice to expand my collection—even though I’m at two right now. It’s slightly warmer and a bit more bold; you get a lot of the rose in there. I might wear it at night versus day.

Where do you spritz it?
Classic spots: two under the neck and one over what I’m wearing so it stays on the clothes. Neither of them is too in-your-face—Florabotanica even less than Rosa.

Before you were introduced to Balenciaga, what was your go-to scent?
This is where I started. I started doing this when I was 22 or something. Possibly 21. I hadn’t really experimented with using fragrance.

So there wasn’t even a bit of Curve or cucumber melon body mist in the mix as a teenager?
No, I wasn’t that type of teenager. I started off well [she said, pointing to the fragrance].

Growing up in a family of all boys, how did you learn about beauty?
Sort of by default. It was never a huge priority for me when I was younger. It was something I had to do for my job and something that I always strained to do. I think I noticed a pointed difference in how I approached this whole world when I met Nicolas [Ghesquière] on a photo shoot. It was really concept-oriented, beautiful, and elaborate—the same energy I really appreciate on a movie set was on this photo shoot [with Bruce Weber for Interview]. [Nicolas] was so awesome and driven and clearly a very talented artist. He opened my eyes to that side of things. I would probably be a very different version of myself without [all this]. It pulls out slightly more buried sides of you. I grew up as a full-on tomboy—looked like a boy until I turned 15.

Somehow, I don’t think that’s possible.
Dude, you could not decipher between my brother and me.

Was your hair really short?
Yeah. I wore his clothes, full on didn’t care at all about anything—I realized I was a girl when I turned 14. It’s been a slow, steady progression, but looking at things now from the outside, I’m super into it. I like the extremes of [beauty]—I like that you can go really hard to one side or the other. I don’t like that middle ground that’s deemed “pretty” [she said, using air quotes].

What is the best beauty tip you’ve ever learned?
Water and sleep.

I suppose both are a rare indulgence for all of us.
If you think about it and you’re feeling kinda rough, if you just give yourself a nice week of treating yourself really well, you’ll look better. This is so lame—my answers are ridiculous right now—but if you’re happy, you look better. If you stay positive—negative people just walk around and…

Yep, nobody likes a negative Nancy.
The only reason I’m saying this is because I genuinely don’t have these beauty tips, but I try not to wash my hair so much because it gets dry. And that’s about it.

So how do you get your perfectly undone waves?
Well, my hairstylist woke up really early…I don’t really like to use too much heat on my hair when I’m not working. I think he used a few loose curlers and sort of [finger-combed] and used a little bit of hairspray. My hair was really clean, too, which usually I don’t like. I like to add volume with dry shampoo and mousse—I like to gunk it up. So I’m feeling fresh today!

You’ve had various hair colors, ranging from blond to black. Which do you think suits your personality best?
Probably brown hair. When I’m blond, I feel very blond. I like having darker hair, but to have jet-black hair, it is a thing. It becomes your look a little bit. I like to stay neutral. When I’m not working, I like to be ready to sort of—it sounds lame—but transform. If I’m ever definitively something, I’m always like, Oh, God, well now I’m going to have to change that soon anyway. It’s always very fleeting.

You’re famous for your porcelain complexion. What’s your secret?
I use the Proactiv [three-step system]. It really works for me. I’ve used it since I was a teenager and I just sort of kept it going. And if I stop [my skin] will go crazy. Maybe that’s not true, but I’m just going to hold onto it while it’s working. I try to moisturize a little bit more because it has a tendency to dry your skin out a little bit. I like Dr. Hauschka and Dermalogica [products].

Do you have any tricks for getting a smoky eye—at least when you’re doing it yourself?
Yes, that’s a very different situation. I’m actually really lucky because I don’t have to do much makeup because I have raccoon eyes—they are so dark. It’s good and bad for me—it’s not just the top, it’s the bottom, too. That I roll with. I use concealer for the bottom. I use black eyeliner and mascara messily, smudge it, and literally that’s it.

What are your go-to goods for that look?
I switch it around often. I’m given a lot of makeup, so I just use what I have. I’m not that specific. It’s fun when you do find something that really is awesome.

So what’s an example of a product that’s really awesome?
There’s actually this [black] eyeliner from Topshop. It’s inexpensive, really good—I buy five of them at a time because they stop making stuff like that. You’ll find something you really dig, and then it’s gone.

What is your biggest beauty mistake?
There have definitely been a few because I’ve been doing this stuff since I was so young. Literally, at 12 or 13 I was walking my first few red carpets. So I bet if I looked back through a few of those photos…I mean, it doesn’t really matter because I was 12, 13, or 14, so it’s hard to harshly judge myself—but I’m like, What were you thinking?! But I do take credit for all of it, the good and the bad. I was into it then, so there ya go.

Gotta own it. So who is your beauty icon now?
I just worked with Juliette Binoche, and really, it’s alarming almost, her beauty. When she walks into a room, people gravitate toward her. You can’t help but look at her. This might sound a little ridiculous, but genuinely she has a grace that’s undeniable. She’s really a woman to look up to. She’s amazing.

Is there something you would never try, like, say, teal eyeshadow?
I feel like I’ve done teal eyeshadow! I probably wouldn’t do black lipstick, unless we were doing some weird, high-concept shoot, which could be cool.

Never say never, I guess.
I don’t like peplums [she says with gusto]. It’s insane that they exist. There are one or two things that the stylist I’ve worked with since I was kid, since I was literally 13, will never get me in—like a high-heeled boot.

Wait, why?
They’re great on other people. I just have this very odd aversion to high-heeled boots and peplums.

Hey, everyone has their thing. What was it like to play a female soldier in Camp X-Ray?
She’s an interesting girl, that character, because the times where she feels most comfortable and most like herself is definitely when she’s in uniform. So trying to find her outside of uniform was interesting because it was very bare, but not necessarily in a good way. She has to build herself up a little bit before that vulnerability is an attractive quality. Every time she put on the uniform, it was like you bind the hair, you wear no makeup, don’t pluck your eyebrows, and you take any chance of being considered pretty away. It’s like you’re not going to think about it, it’s not even an option. My makeup artist was awesome. She added a lot of freckles and made me a little bit sun-damaged—it was really subtle, you wouldn’t notice unless I said it. Then you’d be like, Wow, I can’t believe that’s makeup.

So I assume that meant less time in hair and makeup every day?
It was really quick. It was pretty amazing.

Of all the characters you’ve played over the years, whose beauty look do you identify with the most?
It’s tough because the characters I’ve played are very specific and slightly extreme, like the ones who actually have definitive looks—like Joan [Jett]. Some of the other parts that I’ve played are just very normal, just a girl. In a very boring way, just because I’m fairly simple and practical—I’m sure people will love this—but Bella in Twilight is pretty straightforward. And to be honest, that’s very much like who I am. At the same time, if I think about what I aspire to…all of the characters in On the Road, as much as it’s a period piece and it’s hard to identify with the specific clothes, the garments themselves, the way they wore them is so cool. We’re not used to wearing dresses and stockings, but they were. So it was taking those things and making it look like it’s not formal in any way. I like things that look lived-in.

As long as they’re not a peplum or a high boot.
Absolutely not.