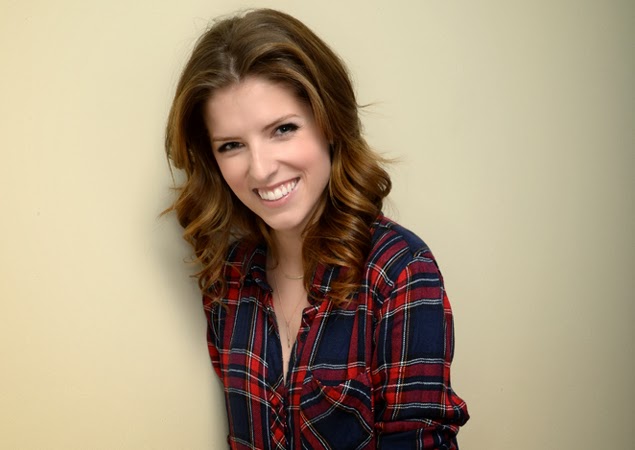 GQ : When was the last time you cried?
When we wrapped [upcoming film] IntotThe Woods in December. I play Cinderella. [Director] Rob Marshall is probably the world's kindest human being, and anytime somebody wrapped, no matter how large or small their role, he made this amazing speech in front of the whole crew. Playing Cinderella had been such a giant responsibility and intricate challenge—how do you bring emotional honesty and realness to a character from a fairy tale?! I'm a pretty sensitive person, especially when I'm in front of a crowd—I should never be allowed to give a speech at a wedding, obviously. And Rob was just so generous and complimentary. I got all misty-eyed and could barely keep my shit together. I just kept thinking, Don't cry, don't cry, don't cry.

How are you, really?
At this moment, super-tired. Yesterday was an amazing day, because all three of my films premiered. Then last night, I went into full-on dance party mode. We combined our Happy Christmas and Life After Beth parties and all anyone wanted to do was dance. So I've literally got blisters on my feet.

What's your best dance move?
I just bounce a lot. I'm like a fucking bunny. I don't know if that's an official dance move but let's call it that—Miss Bounce-A-Lot.

How are things going overall?
I feel a little restless right now. I hate this time of year, because you feel really busy with all of the premieres and related events, but no one is making any movies. I'm really fucking antsy, and I just want to get back to work.

When was your first kiss?
I remember trying to French kiss for the first time at a Bible camp that I was sent to at age 12. I was thinking, Oh no, this is a mess. I don't know if I'm going to be able to deal with this for my entire adult life. At first it was a struggle to nail the mechanics of it, but at some point I figured it out.

What's the title of your autobiography?
Vertically Challenged. I'm only 5'2".

What's the most interesting thing you've ever found?
One morning I woke up and found a note I'd written to myself when I was drunk, but my handwriting was such gibberish, I was never able to decipher it. It made me crazy not to be able to read whatever thought I'd had that felt so urgent that I'd had to write it down.

What's a hard decision you've had to make?
Which house to buy. I was house-hunting for a year, and that was super-stressful. Anybody who's ever bought a house knows.... You want to find a place that has a good vibe, but it's hard because there are creepily aggressive realtors everywhere, and you might feel like, Oooh, this house has a bad vibe, and then you realize, Wait, it's just the fuckers in here being creepy. It took a while for me to get past that.

How often do you go to the dark side?
It's a constant struggle, my friend. I have to work on projecting positivity, because while I like being sarcastic and I like sarcastic people, that's only one aspect of my personality. There are times when I can have sincere, unironic love for stuff, too.

Who is one of your favorite people?
[Life After Beth co-star] Aubrey Plaza. I did the movie with her because she asked me to do it. I think the way she phrased it was, "Hey, I'm about to be in a zombie movie—do you want to fight me in it?" And I was obviously way into that.

She's a fun person to experience new things with, because she's one of those people who's just really unapologetic about who she is, and I think that's really admirable, because I'm constantly trying to make sure that everyone else feels comfortable. I'm always like, Okay, what's the tone of the room? What's this person's vibe? How do I fit in?!

Do you have any nicknames?
Mostly people go for "Banana," which I actually like. You'd think I'd find it annoying, but I think it's super-cute. And "AK-47," because of my initials. I like that one, too.

Are you pro- or anti-karaoke?
I was anti until I made Happy Christmas, and the [Joe] Swanberg crew took me out for karaoke. I finally got what it was all about. I'd never realized what a big deal the art of choosing a karaoke song was. At first, I chose some bad ones and everything  was mediocre. But then I did TLC's "Waterfalls" and it was a big hit.

Between flight and invisibility, which would you choose?
Totally invisibility! Anyone who says flying is a fucking liar. Invisibility is just so much more practical. You can go for a walk naked. You can do anything you want! And I think it would be amazing to be able to witness the world as a fly on the wall, and observe people when they believed no one else was watching.

As far as flying goes, I mean, what are you even doing? It's cool and everything, but why not just go skydiving? Everybody would be asking you for rides all the time. Total garbage.

Okay, speed round. What are some of your favorite movies?
The Women, from 1939. Wet Hot American Summer. And Hot Fuzz.

If you had a theme song, what would it be?
"Brick House" by the Commodores.

Any tattoos? Ever thought about getting one?
No and no.

Daniel Craig or Sean Connery?
I'm having fun just picturing the both of them.

In what era of history would you like to go on vacation?
The 1970s. Anytime before then was generally crappy for women. Actually, my dream would be to go to Woodstock in August of '69.

Who are you, really?
I'm a tiny dormouse in the body of a person.

What makes you the happiest?
Sugar. I'd love to say something deeper, but let's be honest: sugar. Fruit tarts and crème brûlée.

What do you want in life? What do you hope for?
I hope I always win at scavenger hunts.

Finally, what is your must humbling moment?
Recently, I met my good friend's eight-year-old daughter, and she said, "Hey, I've got something to show you." I kind of knew what she was about to do, and I was right: she did "Cups" for me, and it was really sweet. Then later in the evening, she said to her younger sister, who was four, "Do you know who this lady is? She's very famous. And she's famous for one thing only." [Laughs.] I just remember how important she felt it was to explain to her little sister that I was famous for one thing only—she even held up a single finger to drive the point home. I was like, Thank you, Lord, for teaching me humility.
Upplagd av rosebellas kl. 01:05