via @vonch
Ser'Darius Blain will be attending Sundance for his new movie Camp X-Ray which also stars Kristen Stewart. 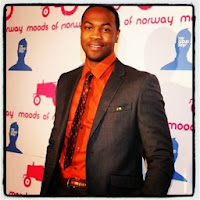 huffingtonpost
(..)
This will be your first appearance at Sundance for your film Camp X-Ray also starring Kristen Stewart. Give us the breakdown of how this all happened.

"I'm super excited to be attending Sundance for the first time, especially with so many great films making their debuts there in the past few years. I had just returned to L.A. from filming When the Game Stands Tall when I got the audition for Camp X-Ray.

When I saw the breakdown for my character, Jackson, I saw an opportunity to bring a little lightness to a somewhat heavy script. When I went in to audition for Richard Hicks, I felt an immediate connection to the character Peter Sattler had written. Jackson's a big, kind-hearted jokester but he's also tough and responsible at the same time.
I literally just went in the audition room and had fun. I didn't think much about it afterward since this business is such a numbers game so I was pleasantly surprised when I got the call from my agent that I had booked it. Camp X-Ray was one of the most rewarding professional experiences I've had so far. We had a top-notch cast, a passionate, collaborative director and a story that's going to really provoke some thought when it comes to terrorism and humanity overall. I think it will be well-received."

"I don't know that I'd say any audition is ever 'easy' necessarily, but the one in which I had the least amount of stress was Camp X-Ray. When the Game Stands Tall was probably the toughest series of auditions I've had since Footloose. The pressure of auditioning for someone like Vickie Thomas who has given so many stars their first shot was daunting. Thomas Carter and David Zelon were also in the room and I have a tremendous amount of respect for their work so it added a little extra pressure.

My audition scenes were heavily emotional, so having to reproduce those emotions over and over again in chemistry reads was challenging, but in the end it was very rewarding. Maybe Someday was an interesting audition. I got the sides (piece of script) last minute and didn't think I was going to be able to make it since I was filming Camp X-Ray at the same time. There was heavy dialogue for my character so I was a little nervous about being able to deliver it after so little prep. When I left the audition, I was sure I had bombed it and decided to tape it so the producers (Christy Dooley/Cindy Popp) and writer/lead Michael McKiddy could see that I didn't completely suck. Little did I know, I had already booked it. They never saw my tape. It taught me that sometimes you have to just trust your work and your process."
Upplagd av rosebellas kl. 04:56