Source On 18 February a 'National Conversation' was launched by the Welsh Government at the Wales Millennium Centre in Cardiff, attended by award-winning Welsh actor and UNICEF's advocate for children's rights Michael Sheen (he's in The Twilight Saga amongst many other films), who lives in Neath Port Talbot. He gave this inspirational speech. 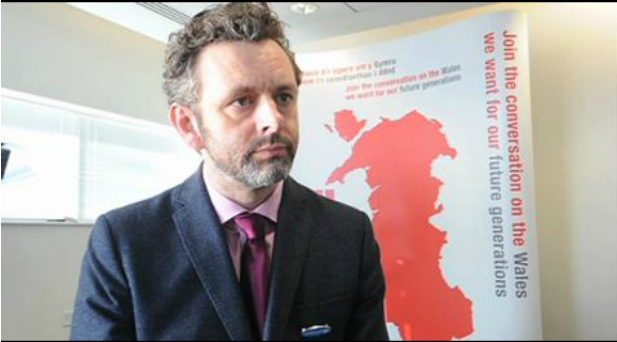 walesonline People across the country are being asked what they would like to see in Wales by 2050, as part of a bid to shape the long term goals of Welsh Government.

Today, will see the launch of a National Conversation to garner public opinion about what matters most to them – be it health services, jobs, or climate change.

Ministers have said the feedback will inform the upcoming Future Generations (Wales) Bill. The bill, due to become law next year, will outline the long term goals the Government should be pursuing.

It’s hoped the pilot, called The Wales We Want, will provide an opportunity to engage a cross sector of communities, businesses and the voluntary sector in establishing a set of shared, long-term goals.

He said: “Our lives and our governments are increasingly driven by short-term pressures yet decisions we make today will shape the world for future generations. The challenges that a lot of public funding is focused on are dealing with crises, whether that be flooding or ill health.”

He said preventative action, for example adaptation to climate change, was likely to be at the fore of people’s mind because of the recent flooding.

“Preventative measures are important. I think it’s true to say in some areas there hasn’t been enough attention paid to preventative action. In terms of health for example, we need to look at how we address issues around poor health, caused by obesity and poor diet and a lack of exercise.”

Mr Davies insisted the exercise was “not just another Government survey” and said the Future Generations Bill would look at how solutions could be found across all Welsh Government departments.

“This National Conversation is an opportunity to focus on our aspirations for the Wales we want for our children and grandchildren,” he said. “It will help shape the long term goals that we can all work towards. We will also need to set out the measure of progress that we will want to see in respect of whether we are achieving those.”

The launch event today at the Wales Millennium Centre in Cardiff, will be attended by key supporters including award-winning Welsh actor Michael Sheen.

Sheen, who grew up in Port Talbot said: “As both a Welshman and Unicef UK supporter, I’m proud that the Welsh Government is opening up a conversation about the Wales we want to see for our future generations. This is a fantastic opportunity to ensure the children of tomorrow are protected, have their rights respected and are offered opportunities to flourish. Together we can put children’s rights at the heart of our communities and our daily lives.”

Other prominent speakers will be Jonathon Porrit, author of acclaimed environmental novel The World We Made and founder of Forum for the Future, as well as award-winning poet Eurig Salisbury, and rapper and lyricist Rufus Mufasa.

The poets will be helping schoolchildren to compose poems to act as inspiration for the ‘Conversation’, which will be performed by the poets and children on the day.

Minister for Communities and Tackling Poverty, Jeff Cuthbert, said: “This conversation is about the kind of Wales we want to see in the future. How do we ensure that the decisions we make now strike the right balance in securing a healthier nation with better prospects without adversely impacting on our natural resources?