Teen magazine Julia has come out with a new magazine called Julia Star. The first and second issue came out today. First was about the movie Fame and the second about Twilight.

Here are a few scans from the magazine: 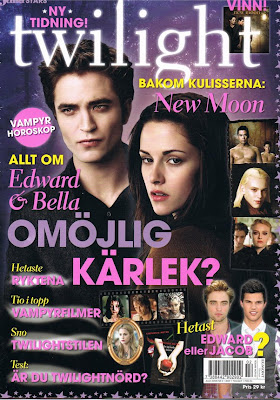 The magazine contains information on the Twilight and New Moon movies, behind the scenes, starportraits, posters, Twilight horoscope, rumours, tests, stuff...and so on..

Translation page 1: The Twilight movie begins with Bella Swan moveing to her father in Forks, Washington,from sunny Phoenix,Arizona where she grew up with her mother.

From the verry first day of school, she smitten by the mysterious Edward Cullen, who behaves strange in her presence.
When Edward saves Bella's life by stopping a speeding car with one hand, Bella understands that Edward is not like everyone else.
She becomes fascinated. The truth will be revealed to her eventually and Bella will understand that Edward and his family are vampires.
Bellas and Edward's love is quite complex - Edward must struggle with his self-control to not accidentally kill Bella when they are together.
To top it all, they run in to another vampire clan whose leader, James, chooses Bella to be hes prey ...


Although Bella escaped being killed by the vampire, James, Edwards and Bella's relationship is not without dangers.
When Bella is visiting at the home of the Cullen family she accidentally cut herself,
and jasper loses control and throws himself on Bella at the sight of the blood.
Edward decides then to leave Bella because he does not want to expose her to dangers.
The abandoned Bella is consoled by her childhood friend Jacob Black.
What Bella does not know is that Jacobs tribe has a secret too. Jacob is part of a pack of werewolves
who are the bitter enemies of the vampires. When Bella starts deliberately exposeing herself to dangers,
because she can "hear" Edward's voice, it leads to a series of misunderstandings that make Edward
to believe that Bella is died.so he goes to Italy to let the Volturitribe, "the vampires royal family",
kill him, the Cullen family and Bella hurries after him to stop him.


Translation page 2 (from Linnea to ROBsessed)

In the Twilight saga's second part two new important groups are introduced: Jacob Black and his werewolf friends, and the ancient vampireclan the Volturi.


Everyone that has seen and loved the first movie recognises Jacob Black, Bella's childhoodfriend that lives in the native reservation by La Push. Jacob is a member of the Quileutetribe, and he was actually the one who told Bella the vampirelegend. What Jacob didn't tell was that because the vampires had increased in numbers in the area, another old legend is brought to life: certain members of the tribe becomes werewolves, the vampires bitter enemies. Before the filming of New Moon all the members of the werewolfpack work hard. Between takes they also took the chance to lift weights and do pushups. To go around with a bare chest i cold Vancouver was probably not the cosiest every time. But no one complained - werevolves are above that!


In the movie New Moon we get familiar with the vampiers oldest and most powerful family - The Volturi clan. If there was a royalfamily among the vampires this would be it, Edward explains to Bella. The Volturi clan is ancient and has huge power. It is to them, in Volterra, Italy, that Edward heads when he believes Bella to be dead - to get sentenced to death, because he doesn't want to live in a world where Bella does not exist.