belfasttelegraph Kellan Lutz has revealed starring alongside Sylvester Stallone, Arnold Schwarzenegger and Jason Statham in The Expendables 3 was a "dream job".

"I got to work with all my heroes. I love action movies so working with Sly, Statham, Mel Gibson, Antonio Banderas, Jet Li, Arnold, Harrison Ford - what a dream job," he said.

"We were all in a helicopter with everyone piled in and I thought, 'When will this happen again?' And Arnold had his tag line, 'Get to the chopper!' Everyone loved being there, everyone was so much fun to work with."

Kellan plays a character known as Smilee and joked his name doesn't reflect his true nature.

" Smilee doesn't smile, that's for sure," he quipped. " My character is the leader of the young Expendables - Sly has to recruit some younger guns because the older guys are showing some wear and tear."

The actor hailed Jason as a real-life hero after his truck rolled into the Black Sea as they filmed in Bulgaria.

"Jason's a beast. He's a stuntman so he knows how to take care of himself," he recalled. "He went into saviour mode and wanted to take care of everyone. He wasn't concerned about himself. Hats off to Jason."

Kellan also described Mel Gibson as a "genius", saying: "I had a scene with him and he is just the genius to work with. I've been a huge fan of him.

"For Hercules, I watched Braveheart every single day on set because he had some of the most epic battle scenes and battle yells so it was fun talking to him about that." 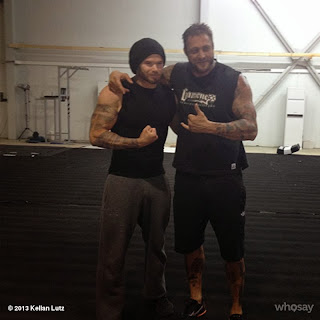